From July, I was told that the next eye could be treated with C3R after a month. And so I waited for the next letter. And waited. It got to November, which was five months after my first op. The dizziness grew worse and I was beginning to get quite down again. So I wrote to Queen Victoria Hospital, with an example of my current vision created in photoshop. To their credit, in a week they called and said they were looking into what they could do.

A few days later, an appointment plopped onto my mat for the next C3R at the beginning of December. The process was held on a Saturday, with one nurse and a consultant to clear the backlog. It was all very relaxed, and I also got to look at my file, which I am told is not something that is normally permitted. Why I haven’t a clue- it’s my eye, after all! The below is an image of the topography of my eyes, which might be of interest. 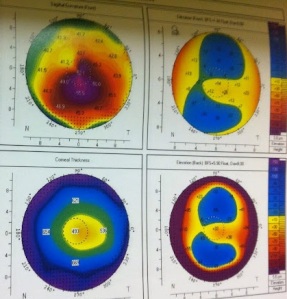 I was more at ease after already having the C3R, and the nurse, a lady called Mimi, was lovely and very comforting. She put on Phillipino music and it was all over before I knew it. Again, as with the previous process, I was out within 30 minutes, and signed off for a week.

The next two months proved to be really difficult, mostly because of the spaced- out feeling and that there was no conclusive proof it was my eyes. I had an MRI scan and got the results just before Christmas, that the ventricles in my brain may be slightly enlarged, and that a follow-up MRI was needed, and so there has been a lot of wondering if the dizziness is caused by the Keratoconus or not. It feels like it is vision based.

I felt that the final proof would be the procedure for Intacs, which would prove me right or wrong and that either way, that this would be confirmation. And so I rung and spoke to QVH in January, and they booked me in for early Feb 2012 for Intacs in my left eye.

Patients are required to attend pre-op before Intacs, and so with a mixture of excitement and worry I went to the pre-op. I must admit I watched several examples of the operation of YouTube, which perhaps wasn’t the best idea, but I had resigned myself to the fact this was the best option for me.

I was in the hospital for 3 hours, mostly waiting, until I saw the consultant. He told me that he was doing the procedure himself, along with a colleague, who he went to introduce me to. The colleague then dropped a bombshell: he didn’t want me to have the procedure.
“You’ve come through the system faster than we would have anticipated,” he said (This most probably because I made a nuisance of myself with the scheduling staff). “Your vision after the C3R looks a little better.”

In one way this was true- I could now make out one more line of blurry text with about seventeen lines of ghost images beneath it, all bleeding into one another. Hardly an improvement in my books, when I feel most days like my head has been put through a blender. I told him as such.
“I hate to do this the night before the operation, but my recommendation, and my decision is we will not go ahead with the Intacs. It may well make your vision worse at this point and we have to try another form of lenses.”

Given the sterling success of previously with lenses, you can imagine my trepidation. However, I was told that I should try the different, hybrid lenses before anything else. They are apparently the Dime bar of the contact lens world- hard on the inside, soft on the outside, and they might be the answer. And so, he dismissed me to book an appointment for the QVH lens clinic.

In a word: bollocks.